When crisis hit, it was time to get Podgy

As Podge celebrated its 25th anniversary recently I am often asked where the name Podge came from and how it started. As Covid19 takes hold and we are all forced indoors to self isolate this is as good a time as any to tell the story.

Firstly, in the year that The MPA will celebrate its 100th year in Manchester a little bit of background about my journey. I grew up on Langley Council Estate in north Manchester, nearest shops were in Middleton which had three cinemas back in those days, a fantastic chippy and no Arndale. Paul Scholes & Steve Coogan are the only famous names I can remember but there must be more. My personal heroes back then were Denis Law, Bobby Charlton & Georgie Best but my scaffolder dad was more of a Summerbee, Bell & Francis Lee guy. Either way, we were both very proud mancunians.

I did a 5 year apprenticeship in Ducie Street Piccadilly learning to be a hot metal typesetter in a printing company, 1968-1973 and on day release at Manchester Poly. Apart from a season at Blackpool Pontins as a bluecoat I moved to London and met an amazing cockney lady named Babs and left my sisters & mum and dad holding the fort in Manchester. This year will be our 45th wedding anniversary so I definitely made the right choice.

Six years later in 1979 myself and two good friends, Ken and Derek, founded and ran a typographic studio called APT and all of our clients were design agencies and/or advertising agencies. We took great pride in producing beautiful type for our clients and loved it when they won D&AD or Design awards and built a lovely camaraderie with the owners. Social networking in the eighties was in the form of the APT 5-a-side football competition at the Elephant & Castle. Business was booming for ourselves and our clients and one of our advertising agency clients said they would like to buy our business. By that time we had a 100 strong studio working 24-hours a day. Long story short, in 1987 Ken, Derek and I started a three year earn out which ended in 1990 and life was good. What happened next reminds me of the current Covid19 situation where we had a major recession in 1991/92 and a large number of my clients from the 80’s had fallen on hard times. I had been lucky and had sold before the crash and had joined another studio as MD in 1991 and was one of the early adopters of this new thing called DIGITAL. Back then it wasn’t websites and such like, it was interactive CD Rom’s, the internet hadn’t yet been invented. At the time I was chairman of The Typographic Circle and little did I know back then that in the next decade I would be inducted to BIMA’s  Digital Hall of Fame.

In the early nineties it was my strong opinion that quite a few of my design clients would have fared much better if they had shared their situation with fellow designers. I had taken six of the leading designers for a lunch at The Oval in the eighties and was amazed to find out that I was the only common denominator.

Whilst they were all at the top of their game they didn’t see any value in chatting with their opposition, they only had time for their clients.After the recession I rang these same six designers and suggested we all go out for a lunch, each of us invite one other person of similar seniority, book a cool venue and split the bill between us and share war stories.

I chose Quaglinos in February 1994 (it was the new Terence Conran restaurant and deemed to be cool). I booked the private room and word of mouth ensured that our first ever lunch had a capacity of 30 people including legends like Alan Fletcher, Erik Spiekermann, Marcelo Minale etc etc.

I decided to give this gathering a name and I decided that as the afternoon would all be about food and drink I would call it PODGE. As a mancunian we always referred to putting on weight as “a podge” and this was only ever meant to be a one-off gathering of design owners. Amazingly these 30 senior folk absolutely loved it and they all paid their share of the final bill. As there were no emails in those days I had to get a copy of the bill from Quaglinos and take 30 copies and post it to each of them and cheque was their preferred method of payment. We had a few famous stamp designers in our group so I chose from one of them.

Without exception on replying they all asked me if I would get them together again in 1995 as they found it really valuable. So once a year for 10 years we had this amazing design gathering of the great and the good at various venues culminating with the Atlantic Bar & Grill and The Arts Club. Last year was the 25th anniversary of www.podgelunch.com By now the digital world was flying and I was running a successful digital agency so I had a foot in both the design and digital camps. Michael Nutley, the editor of New Media Age had attended one of my design lunches and asked how I managed to get the most senior people to attend each lunch and wondered if I would be able to do the same for a digital gathering. They offered to do all the admin free of charge for me if I needed help. So in December 2003 www.digitalpodge.co.uk was born and is now 18 years old.

Sport came next and that came about when one of my clients from the Football Association (Jimmy Worrall now of Leaders in Sport) had attended a podge lunch and knew that a lot of the work I produced in my day job was for the sports industry.

At the time we (Real Time Studio) had created the identity for England’s bid to host the 2006 world cup, the UK Athletics identity, the UK Sport identity and the Sport England website as well as many other projects including the first ever Premier League website. Jimmy felt that the sports industry had nothing like podge. Needless to say, Life is Short and I tend to say YES more often than NO and www.sportspodge.co.uk was born in 2005 and is 16 years old this year. Being in a room with so many gold medal winners and sportspeople is quite exhilarating.

And finally, as a proud mancunian through and through I was approached by several digital agencies in the north of England asking if I would host a podge in Manchester. Obviously I said YES and because of my love of Hollands Meat & Potato pies stodge found its way into the name www.stodgepodge.com. Our venue has always been Harvey Nichols Manchester and we celebrated our 10th anniversary the week before Covid19 closed us all down in March. 160 people joined us and our theme was “a 10 year stretch” some familiar northern faces are on the wonderful video created by SaneSeven. https://youtu.be/_Tziv5Tm4sk

And looking a little less tough on  https://preview.tinyurl.com/ya9h6jt3

The general thing that follows through all podge lunches is that no tables are sold only individual places. 50% guests are changed for every lunch and there are no auctions, raffles, awards ceremonies etc. The seating plan is always a work of art making sure each table has a great mix of senior people and half way through the lunch all the odd numbers change tables. At Design Podge the seating plan has led to two weddings (currently with 5 children and a great dane between them). Each lunch is themed and a different agency put their hands up to do the branding and website. All of the lunches sit on www.podgeevents.com where we keep an archive of previous themes. Subject to Covid 19playing ball the next one will be on September 18th for the Sports Industry, and the first 200 guests have confirmed on www.sportspodge.co.uk.  This year’s sports theme is all around Coaching.

So that’s how Podge started in the teeth of a nasty recession and somehow the model has proved to be a great success for the Sport, Digital & Design communities and 25 years after the first one I am determined not to let this crazy virus spoil our fun this year. In previous years we even slipped in the occasional digital podge overseas, so far in Stockholm, Amsterdam, Vienna & Hong Kong. Maybe in 2021 we can slip in another fun journey. 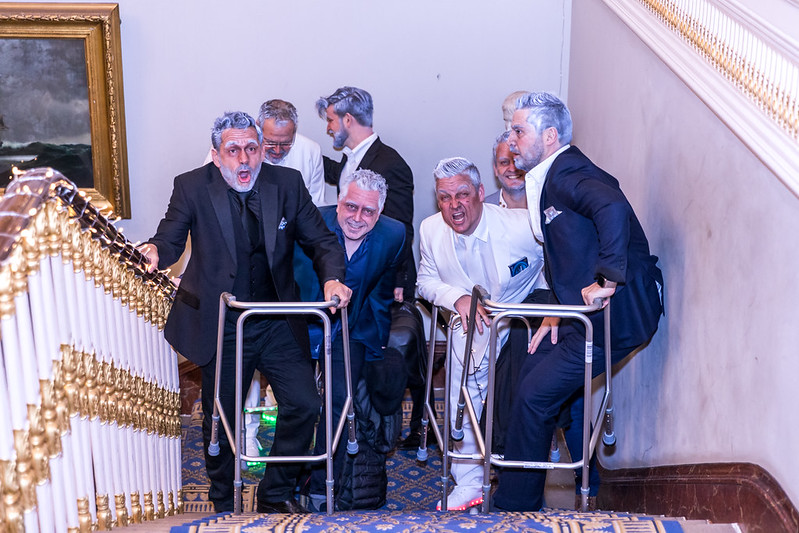 The next 25 Digital Podge

SAVE & ACCEPT
Go to Top